Space weather which is governed by solar activities is the key cause of Sun-Earth interaction system. The Sun-Earth interaction significantly affects the magnetosphere- ionosphere- thermosphere system leading to diverse physical phenomena. The earth’s ionosphere is highly affected with the space weather events such as Coronal mass ejections, geomagnetic storms, solar winds and solar flares. The earth’s ionospheric parameters such as electron density, total electron content (TEC), electron and ion temperature behaves in a varied fashion to the incoming solar flux, electrodynamic drift, which makes its prediction very complicated. These parameters are found to be varying with local time, season, latitude, longitude, solar activity and with the conditions on sun and earth’s magnetic field.

Recent increase in solar activities has resulted in an increased concern of the space weather community. These solar activities can lead to the major catastrophic events. It has been proven that every 11 years or so, the solar activities reaches to a peak; this phenomenon is referred to as solar cycle. And peak observed during these solar cycles is termed as ‘Solar Maximum’. The solar maximum can extend to several years either side of the actual peak and the Earth gets subjected to by intense space weather. When these solar storms released due to severe solar activities are punched on to Earth, it may lead to various exceptional activities as well as major disasters leaving Earth out of electric power for years to come.

Solar activities refer to any natural phenomenon happening on or in the Sun. These activities may be classified into:

“Solar flares are abrupt bursts in the concentration of solar emission.”

“The solar wind is composed of particles charged with very high energy that are radiated from the sun.”

“A Coronal Mass Ejection (CME) is an immense explosion of solar wind into space.”

“Sunspots are momentary phenomenon on the photosphere of the Sun that appears as dark spots contrast to neighbouring regions.”

“Solar Cycle is a period of 11 years or so where the sunspot number reaches to the peak and solar activities increases.”

“Space Weather are the fluid environmental conditions of space, especially near- Earth Space or the space from the Sun’s atmosphere to the Earth’s atmosphere.”

An abrupt, rapid and severe variation in brightness is termed as a ‘Flare’. When the magnetic energy which has built up in the solar surface is abruptly released, a solar flare takes place. Due to this sudden eruption, radiation is produced across almost the whole electromagnetic spectrum from long wavelength to short wavelength end. The quantity of energy erupted during the emission of solar flares is equivalent to millions of 100 megaton hydrogen bombs bombarding at the same instance. On 1st September 1859, first solar flare was recorded in astronomical records. And the scientists who viewed the large solar flare, separately experimenting were Richard C. Carrington and Richard Hodgson.

Due to this eruption of the magnetic energy, particles including heavy nuclei, protons and electrons are excited and accelerated in the solar environment. The amount of energy observed during mission of a flare is generally on the order of 1027 ergs/sec. And large flares can release energy up to 1032 ergs/sec. This energy released is 10 million times greater than the energy evolved from a volcanic eruption. And on the counterpart, it is less than 1/10th of total amount of energy emitted by the Sun per second.

A solar flare consists of typically three stages. First is the precursor stage, where magnetic energy release is triggered. Soft X-ray emission is observed during this stage. In the second or impulsive stage, electrons and protons are accelerated to energies beyond 1 MeV. During this stage, radio waves, gamma rays and hard X-rays are released. The steady build up and perish of soft X-rays can be observed in the final stage named as decay stage. The existences of these stages can be as tiny as a few seconds or as extensive as an hour.

The frequency of occurrence of these solar flares coincides with the solar cycle of 11 years. During solar minimum, dynamic regions are small and rare, thus the minority solar flares are identified. As the sun reaches its solar maximum, an increase in rate of eruption of solar flares is observed due to increase in the number of active regions on the solar atmosphere. This time sun will reach its peak early 2014. (Information source: flares, Goddard Space Flight Centre web link, NASA) 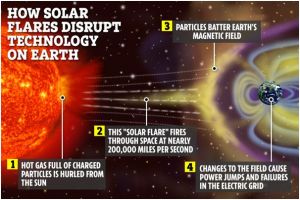 Webinar on “Sustainability in IT Systems”