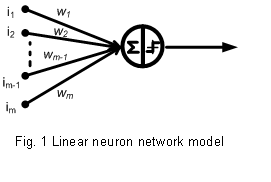 The multilayer perceptron (MLP) model shown in Fig. 2(b) is the most popular neural network model for the nonlinear estimation and classification problems. This, in fact, is an extension of the perceptron network. The competitive networks shown in Fig. 3 are unsupervised networks that can find clusters in the data. The self-organizing map (SOM) competitive network, shown in Fig. 3, not only finds unknown clusters in the data but also preserves the topological structureof the data and clusters. Two well-knownneural networks for time-series forecasting are the Jordan and Elman networks shown in Fig. 4. These networks contain feedback links that help to capture temporal effects.

The neural networks generally have three layers. The single or multiple inputs form the input layer. This is connected with its corresponding weights to the middle layer called hidden layer. There can be multiple number of hidden layers and can have more than one neuron in each layer. The last layer which produces the output of the neural network is called output layer.