The Hope Foundation and Research Centre celebrated its 3rd Founder’s Day on I²IT Campus.
12 March marks the birthday of the Founder President of Hope Foundation and Research Centre, Late Shri Pralhad P Chhabria.
Gracing the occasion as Chief Guest this year was Dr. Radhakrishnan Pillai, who is Deputy Director, Masters in Leadership Science, University of Mumbai and the Founder-Director of Chanakya Institute of Public leadership. Mr. Dinanath Kholkar Vice President & Global Head Analytics & Insights, TCS and the IEEE Pune Section Chair joined the celebrations to announce the winners of 2019 Late Shri Pralhad P Chhabria Awards.
The event began with garlanding the statue of Founder President in the central courtyard and seeking his blessings for every endeavour ahead. The entire entourage then moved to the Mohini Chhabria Convention Centre and that was where the I²IT Vidya Jyoti was lit. Doing the honours were the Chief Guest – Dr. Radhakrishnan Pillai, Mr. Dinanath Kholkar, Mrs Aruna M Katara, Ms Amrita Katara, Dr Samita Moolani Katara & Dr. Vaishali Patil.
After felicitating the dignitaries of the day, Mrs Aruna M Katara, President, Hope Foundation and Research Centre, spoke a few words about her association with her father. She said that her father instilled in her the tradition of giving back to society. He also emphasized on the importance of educating the girl child. She reminiscenced about an incident when she had asked him what he would do differently if he got the opportunity to which his answer was that he would have completed his formal education. She said that she was proud to be his daughter and be handed this legacy which will live on for a long time.
The Chief Guest, Dr. Radhakrishnan Pillai spoke about “Entrepreneurs – Are they born or trained?” He shared with the audience, his extensive experience of working with entrepreneurs as well as corporate heads and said that Entrepreneurs are LEADERS; and everybody is a born LEADER. However, he emphasized that Leaders have to be trained too – to think and create not individual driven organizations; but self-sustaining institutions. He told the young students to take up entrepreneurship and gave them the 3 stages of any successful business – 1) The Idea Stage 2) The Scale Up Stage and 3) The Exit Stage. His talk was appreciated by the young students, teachers and guests alike
The Late Shri Pralhad P Chhabria Awards instituted by Hope Foundation and Research Centre in association with IEEE India Council and WiE Affinity Group, IEEE Pune Section were announced. But as a prelude to this, Dr. Rajashree Jain, one of the Core IEEE members, Vice Chair – WIE presented a synopsis of the Journey of the Late Shri Pralhad P Chhabria Awards. The envelopes were opened by Mr. Dinanath Kholkar and Dr. Radhakrishnan Pillai and the winners were announced. This year’s winners are
1. Ms Shubhi Sareen – Best Outgoing Female Student (final year graduation) – Shubhi is currently pursuing her final year B.Tech at Delhi Technical University
2. Dr. Rajlaxmi Chouhan – Best Woman Professional (early career stage) – Rajlaxmi is currently working as Assistant Professor at IIT Jodhpur.
They will receive the award and the prizes during the forthcoming IEEE Event.
Speaking on the occasion, Mr. Kholkar said, that he only had 3 important messages to give to the youngsters of this country. The first message is to encourage the girl child to study, to be curious and explore her abilities. The second message was as educated and learned youth, one should find solutions for grass-root problems in areas like farming, animal husbandry and other primary sectors. The third message was to give back to society and not just the “HAVES” but to the “HAVE NOTS”. Connecting with rural India is the key to truly making India a super power he said.
The Founder’s Day ended with a Vote of Thanks presented by Principal, I²IT, Dr. Vaishali Patil. 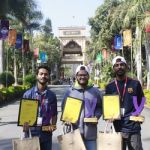